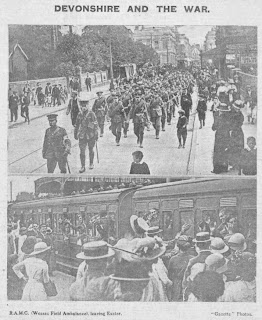 As our colleagues return from our unit's second operational tour of Afghanistan, (why do they call it a tour - we never go sightseeing!), I thought I would put up this picture of 1st Wessex Field Ambulance leaving Exeter after being mobilised for war in 1914. It was published in the Devon and Exeter Gazette on 25th August and shows the unit marching to the Station, to entrain to Salisbury Plain for further training. There had been an advance party leave a week before, and they all met up again at Perham Down on the plain where they became 24th Field Ambulance and part of a regular division, the 8th.

Two weeks before this date, the unit had been in training on Salisbury Plain at Fargo Camp. This was one of three tented camps that had been established in the Larkhill area a few years before the First World War. Looking at pictures of recruit training there from other units, I can see where a few of the group pictures that I have were taken. The rows of bell tents are unmistakeable. In good weather, it must have been quite enjoyable to end the evening sharing good times with your "mates" outside your tent. Not so much fun in the wet! Canvas is notorious for taking a long time to dry off! 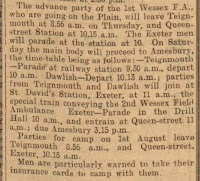 During the early part of the 20th century, it was quite common to publish details of orders and instructions in the local paper. This notice comes from the Western Times and details instructions for the unit prior to leaving for this camp. In 1914, the 1st Wessex had two  detachments. One in Exeter in relatively new accommodation at the Drill Hall in Holloway Street (now under a road junction), and the other at Teignmouth in a Drill Hall shared with other units - so nothing new there! Both units had Transport Sections in their own right, as transporting wounded was as important as treating them in a Field Ambulance. Later in the war, this task would be carried out by men of the Army Service Corps, many of the unit's drivers transferring to the Corps, but for the first couple of years, all were members of the Field Ambulances.

It is interesting to make small comparisons with the Territorial Field Ambulance of that day, and the modern Territorial Field Hospital of today. The majority of the men, both "old hands" and new recruits, were from a non medical background. They came mostly from trades which would be called "skilled manual": Printers (quite a few from Exeter), Metalworkers, Shop Assistants, Tailors, Clerks, and General Labourers. A few had skills that were needed, such as Chemist's Apprentices and Nursing Orderlies, but these were relatively few. Looking at the work that they had to do, strong men were required for Bearing and although they needed to know basic first aid, their main task was to carry a man back to an ambulance or a medical post; whereas the Nursing section would have had to gain more skills and knowledge on how to look after their casualties and to assist the medical staff. But no questions were asked on recruitment and no-one suitable was turned down. They did not have to have a medical background. They did not have to fill in endless pieces of paper or complete competencies. They had to be healthy but they did not have to prove it by endless tests. Their training was considered good enough, and they proved that it was by their conduct overseas during the War. 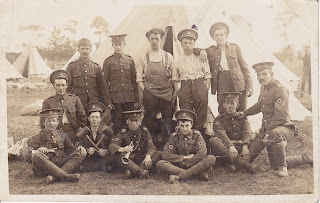 I shall end with the unit waiting to embark for the Western Front in November 1914. Together with their 2nd & 3rd Wessex Field Ambulance colleagues, they would be the first Territorial Force Medical Units to land in France. They were unique in that they had no Regular Officer or NCO serving with them as their RSM had been commissioned. Yet they were given the honour of serving with  a Regular Division, and they stayed with that division until the Armistice. The above picture is not confirmed as being of a group of soldiers from a Wessex Field Ambulance but the original owner has looked closely at the badges, etc and we are sure that it is. It may have been taken on that summer camp in 1914. But it is the youthful look of some of them - boys serving as Buglers probably - and the "old sweat" look of the Sergeant on the right. I wish I know their names and what became of them all.

Lastly, going back to the first picture, not being from Exeter myself, I wondered where it was actually taken. If anyone recognises it, please let me know!