Archie was born in Mevagissey, Cornwall on Christmas Day, 1896. His father Fred was a Shipwright and married Selina Khymbrell in 1888. Archie had 4 brothers & 2 sisters both older and younger than him and just before the turn of the century the family moved to Devonport so that his father could take up work in the Naval Dockyard. It is probable that Archie also followed his father into work at the Dockyard as his Service Records indicate he would have been sent back to the UK to be re-engaged in work there in 1917, but this did not subsequently happen. If a soldier had a skill which was required for the "war effort", it was not unusual for them to be returned to that job, but often on a soldier's pay.

Archie was a pre-war member of 2nd Wessex Field Ambulance, TF and went to France with 25th Field Ambulance in November 1914. He served in the Nursing Section and although he was awarded his first Good Conduct Badge, he also fell foul of the disciplinary system several times for absences and other misdemeanours. Let us not forget that he was 19 when he went to war!

On 6th November 1917, he was admitted sick to the 3rd Australian Casualty Clearing Station. From there he was evacuated by Hospital Train to a Stationary Hospital, and then to the UK on the 13th November.

He was admitted to Mill Road Infirmary in Liverpool and diagnosed with Diabetes Mellitis. (This Hospital was the old West Derby Workhouse Infirmary and does not exist anymore, it having been bombed in WW2 with a great loss of life amongst patients and staff.) However, at the time, there were limited treatments for diabetes which was considered a fatal illness (Insulin would not be in use for another 5 years) and it is interesting to read in their medical report how Archie was put on the "Allen Starvation Diet", a diet advocated by an American doctor, Frederick Madison Allen. This diet involved drastic reduction of calorie intake, especially carbohydrates but it only
prolonged life by a few months. 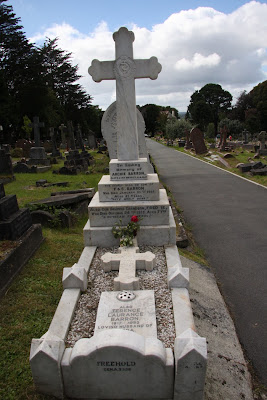 Sadly, and inevitably, he slipped into a Diabetic Coma and died on the last day of January, 1918. He was brought back to Plymouth and buried in a family plot in Weston Mill Cemetery. The cross carries the badge of the RAMC. Several of the family were subsequently buried in the grave including his parents. He is also remembered on  Plymouth's Roll of Honour.
Posted by elaineteresa at 22:29