Pte Allan is one of my mysteries. There are two different families that I can attribute to this man, but no definite evidence for either. What I do know, is that he was probably born in Plymouth in 1891, and that he was probably a pre-war TF member of 2nd Wessex Field Ambulance.He was a Private, and his Regimental Number was 2130, a fairly late number for the TF units.

He embarked for France with the 25th Field Ambulance on 5th November 1914 along with the other first line Wessex units. I cannot find any record of him in the War Diary, nor newspapers, but in the winter of 1915/16, he reported sick and was evacuated back to the UK, and to one of the Exeter War Hospitals where he died on 15th January 1916. 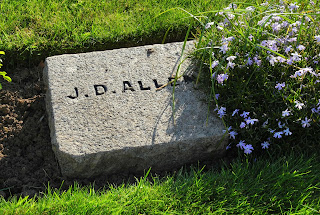 His grave is marked by a simple stone in the small WW1 plot in the Higher Cemetery, Exeter. This little plot holds graves from casualties who died in the local War Hospitals and are only marked by the stone, and a central memorial. His name is also recorded on the Roll of Honour which was deposited in a casket underneath the Plymouth War Memorial on the Hoe.