Known both as O'Hagan and just plain Hagan, Richard was born in 1885 in Camborne, Cornwall. His father was from an Irish family who had made their way down to Cornwall. Also named Richard, he was a gardener and married Elizabeth Mary Champion (widow of John Williams) in 1884. Richard Jnr was the eldest and only son. He had two younger sisters and an elder step-sister.
Richard's first job was Tin Mining but soon left for a job above ground as a Packer for the Great Western Railway, becoming a Platelayer after his marriage to Annie Vine in 1913.

Richard O'Hagan was one of the first to join the newly formed Territorial Force, attesting in Camborne on the 28th September 1908 at age 23 and becoming a Private in the 2nd Wessex Field Ambulance. His Regimental Number was 545 and he attended annual training at camp for the next 5 years, becoming Lance Corporal. He was called up for service on 5th August 1914 and stayed with the second line unit in the UK, possibly because he had just become a father, son Richard being born in January. His second son Robert was born in August 1916 and it is quite possible that Richard never saw him as he left for France with a draft to the 25th Field Ambulance in March 1916.

Richard was not an exemplary regular soldier. He reverted to Private rank on a couple of occasions after promotion and then on 10 January 1917, found himself on a charge of Drunkenness whilst on duty. Away from his family, seeing so much suffering and death, it must have been hard to cope at times, although he was not alone. However this occasion must haven been severe as he was sentenced to 21 days Field Punishment No.1 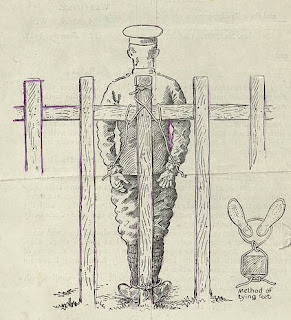 Introduced in 1881 after flogging was abolished, Field Punishment was in use in different forms of severity until 1923. It involved restraining a man, usually in handcuffs, or similar, to a fixed object, such as a gun wheel, for up to two hours a day. This would be carried out for 3 days in every 4. If the man had been sent to a Punishment Camp, the man would also be subject to Hard Labour.

Richard's sentence was carried out in January. Imagine standing like this in the harsh winter weather? We do not know if he was given much in the way of protective clothing. It always seems strange to me that a Medical Unit would use these punishments, but the Regular Army ran on strict disciplinary measures and FP No 1 was carried out over 60,000 times by the British Army during the war. 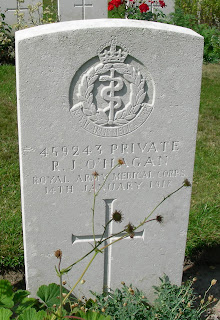 In June 1917, he was attached to the Royal Field Artillery on Water Duties. I think that his experience a few months earlier had weakened him and this may have been a move in order to keep him at the front. He stayed attached to the RFA, although still a member of 25th Field Ambulance, but in January 1918 was evacuated to No 44 Casualty Clearing Station with pneumonia. He died on the 14th and was buried in Nine Elms British Cemetery, Poperinghe. His widow married again in 1924 and died in 1944, remaining in Cornwall for the rest of her life.
Posted by elaineteresa at 08:16