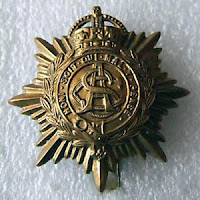 As mentioned before, the Drivers of the Field Ambulances were also members of the RAMC until 1915/16 when they were asked to transfer to the Army Service Corps. Many agreed, but others chose to stay with the FAs and give up their Driver status. Drivers were then supplied by Transport Companies. Percy Charman was one of those men, attached to 26th Field Ambulance after landing in France in September 1915.

Percy was born in Sussex in the village of West Chiltington in 1877. His father worked as a Farm Labourer and Percy was the eldest of five children. At the age of 14, he was boarding at a farm just up the road in Billingshurst and working as a "Farm Servant". Then just after his 18th birthday, he applied to join the Royal Engineers and on 28 April 1895, became a Driver, RE. He first signed up to serve 3 years with the colours, and 9 in reserve, but extended his regular service to 7 years and found himself on the way to the Boer Wars in 1899. He served in South Africa until April 1903, earning several clasps for his Queen's Medal including Cape Colony, Paardeberg and Driefontein. On return to England, he was discharged into the Reserve and promptly married Alice Holt with whom he had two sons, Percy and Ernest.

In 1911, he was living in Woking and seemingly doing well. He worked as a Carman (Driver) for a Laundry, and his wife was also working as a Forewoman in the Laundry. They were able to afford a Maid, but offset the cost by having a lodger, also a Laundry worker. In 1907, he was discharged from the Army Reserve. However, war loomed on the horizon and so, inevitably, in 1915, he found himself part of the Army Service Corps, his army driving experience ensuring he would be a valued recruit. 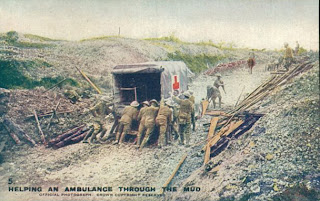 Driving an ambulance just behind the tenches was not an easy option. They were well within range of the shelling, and the Red Cross was not always a guarantee of safety. There were also the physical and natural dangers: mud (as depicted in the famous Daily Mail postcard), poor or non-existant roads, shell craters, etc. A fully loaded car was unwieldy and did not have the capabilities of modern vehicles such as good suspension and four-wheel drive. Significantly, One of only 2 Victoria Cross awards to men of the ASC was to an Ambulance Driver.

However, Percy was now 40 years old and in the winter of 1917, he succumbed to Bronchitis. Without the aid of antibiotics, illnesses such as these were serious and in an older man, who had probably smoked all his life, it was fatal. He was buried in a small plot on the Somme, and after the war, reburied in Suzanne Cemetery No 3, a cemetery was once held French graves until they were removed after the Armistice. His wife did not remarry and died in 1942. Both sons died in 1973 only a few weeks apart.