Now a brief journey away from Medical Units and to the grandson of my great great grandfather's second wife (if you can work that out!). Sidney Cutting was born in Rougham, Suffolk in 1890. His mother, Sarah Clutterham was the daughter of Eliza Stiff who married John Clutterham in 1854. They had 8 children before the death of John in 1872. Eliza married my gt-gt-gt grandfather, John Hardy, a year later after the death of his wife Jane in 1873. Sarah left home to marry Elijah Cutting in 1886, and they had 2 boys, and 2 girls. Sidney was the second son. 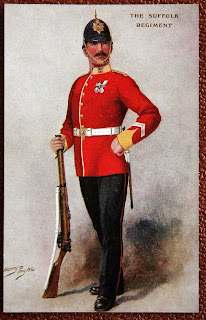 The Cutting family, like most of my East Anglian relatives, were Farm Labourers. Sidney would have followed his brother onto the farm had he not joined the Army some time from 1908 to 1910, enlisting in nearby Bury St Edmunds. Farm Labourers were a magnet for the Recruiting Sergeants and their staff, as they were usually tough & healthy, and in jobs that were not always steady, and often poorly paid. They were used to being out in all weathers, not afraid of hard work and often came from big families. What better career than the big Army family? Sidney was posted to the 1st Battalion, Suffolk Regiment with the rank of Private and Regimental Number 7695.

The 1st Battalion was stationed in Egypt at the time. In 1911, he was in the Military Hospital, Alexandria along with about 20 of his regiment. There is no record of his ailment but several diseases were rife, as well as the ever-present STD! However, when war was declared in 1914, he left Khartoum with the Battalion and landed back in the UK in October. After a couple of months training, they were sent to join the BEF as part of the 28th Div, disembarking at Le Havre on 18th Jan 1915.

Sidney was now a Corporal and would have been a useful member of the Battalion. The 28th Division took up positions between Hazebrouk and Bailleul. They would subsequently take part in the Second Battle of Ypres in April, but only a month after setting foot in France, Sidney was Killed in Action. He was 25. We do not know what happened; perhaps a shell dropped in the trench, perhaps he was the victim of a sniper's bullet, but we do know that with the battles that followed, his grave was lost. He is now commemorated on the Menin Gate Memorial, and on the village memorial in Rougham.