Ernest Stone, born Bristol 1893, was the first man from 3rd (South Midland) Field Ambulance to lose his life, but without leaving these shores. This unit, one of those associated with 219, was under command of the 48th (South Midland) Division which was a Territorial Division formed in 1908 as a result of Haldane's Army reforms, and was mobilised in 1914 whilst at camp - as were the Wessex. They concentrated in the Chelmsford, Essex area to continue training prior to leaving for France in March 1915.

James Stone was a Bristolian man who married Eliza Reynolds in 1869 at the age of 31. They had 9 children, the youngest being Ernest. It was a labouring family and by 1911, Ernest was the only one still living with his parents, his siblings having set up home with spouses or had passed away (4 of their children had died by 1911). In 1913, James died, and soon after war broke out, Ernest left his mother to join up with the RAMC. We do not know whether he was a pre-war member but his number, 1888 indicates he might have been. or at least one of the first to be recruited when war was declared. 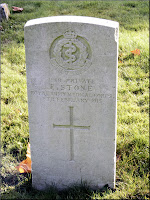 On 8th February 1915, Ernest Stone passed away in Chelmsford and was buried in the military plot in the local cemetery on Writtle Road. His mother died around the same time, and so little is recorded in the Commonwealth War Graves Register. Deaths from causes other than battle injuries were very common. The War Diaries record many more admissions for sickness than wounded, unless a major Battle was in progress. In an era when antibiotics were unheard of, many more diseases had fatal consequences, and other medical treatments that we now take for granted were not in general use. We have no cause of death for Ernest, there is no medal card, or service record, but his name is entered on the 1st/3rd South Midland Field Ambulance Plaque in Bristol Cathedral, so his memory is still upheld.