My 3rd cousin, Frank Stock, was born in Stratford, Essex in 1896. Father Amos was originally from Radwinter, Essex, one of the "ancestral" villages just outside Saffron Walden. Some time between 1881 and 1891, Amos' father Josiah moved the family 50 miles down to the outer London suburb of West Ham. He was a Labourer, and work in that part of Essex was obviously easier to find than that in  a little village as he had tried working for his brother-in-law in Gloucester before relocating with the whole family. Amos went on to marry Alice Boreham in 1891 and they had eight children, Frank being the eldest of five sons.

In 1911, they were living in Forest Gate and Frank had a job as a Shop Messenger for Boots whilst Amos worked for West Ham Council on the road repair gangs.

Unfortunately, we do not have Franks' Service Records but at some time after the declaration of war, he joined the 8th Battalion of the London Regt, more commonly known as the Post Office Rifles. This Battalion could trace it's history back to the 1860's when the threat from Fenian rebels in Ireland was so great that men from the Post Office were made Special Constables to protect the Post Office buildings from being attacked. They then became a volunteer battalion of the Middlesex Regt and actually did duty as the Army Post Office  Corps until that job was taken over by the Royal Engineers. When the Territorial Force came into existence, the Volunteer postmen became the 8th Bn, London Regt (Post Office Rifles). During the war, two battalions were sent to fight with the BEF, with the 2/8th distinguishing itself at Ypres ("The Battle of Wurst Farm Ridge") where a Sergeant won their only Victoria Cross. Frank may have worked for the Post Office at the time, but later in the war, the battalion did not recruit exclusively from the GPO.

At the beginning of February 1918, the two battalions were amalgamated and came under command of the 58th Division. The Post Office Rifles would take part in the last battles in France and the advance into Germany, but on 20th February, Frank died of wounds received in action. He was buried in one of the small burial grounds that populated the French countryside but after the Armistice, was reburied in Chauny Communal Cemetery British Extension where there are now over 1000 graves, mostly from 1918. Up to now, I cannot find his name on any local war memorial, but he will not be forgotten. 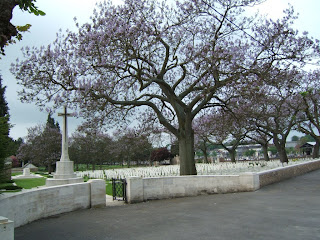 His father, Amos, died in 1947 in East Ham, and his wife Alice died three years later. Of his siblings, brother George served in the Royal Artillery. The last of them, sister Lillian, died in 1993 in Brentwood.