Henry Edmondson was another member of the 3rd South Midland Field Ambulance who did not set foot in France before his death in Chelmsford in 1915. He died two weeks after his colleague, Ernie Stone, on the 19th February 1915 and is buried nearby. He was 18, the youngest son of the late Edward Edmondson and his second wife Amelia. There was an elder brother, Edward, who served with the Army Veterinary Corps, and a middle brother, Albert, who also went on to serve in the RAMC in a General Hospital in France later in the War. There were also two elder sisters from his father's first wife. 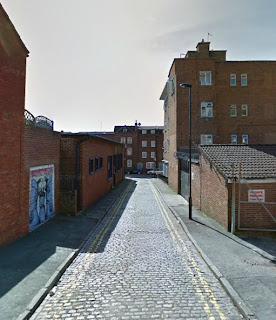 The family lived in Bristol where his father was a General Labourer. He died in 1901 and Amelia became a charwoman to keep the family together. In 1911, they were living in Gay Street, near King Square. Today, it is an area of upmarket housing and office suites, but the little side streets away from the square, remind us of what the area may have been. There is still a cobbled street amongst the modern buildings. The family moved several times, but always in the area. This was not uncommon at the time, but they did seem to settle for some years in Montague Street, after Henry was killed, as his brother Albert, whose Service Records survive, was called up from that address in 1917 and wrote a letter requesting a reference in 1920 from the same address. In 1924, he also applied to the War Office for Henry's medal, but although there is a Medal Index Card, there is no mention of a medal roll number. As he did not serve overseas, he may not have been eligible, but he should have had the Silver War Badge, authorised in 1916 for personnel wounded or discharged sick from any theatre. It seems sad that both Ernie Stone and Henry were left with no commemoration (except the "dead man's penny" perhaps?) even though they died in service. At least Henry's name is found on the 3rd South Midland Plaque in Bristol Cathedral and this blog will remember them.
Posted by elaineteresa at 04:12