A distant cousin to me from our Suffolk roots, Robert Hardy was killed in 1916 in the Balkan Theatre of War. He was born in 1881 in Kilburn, London, the son of Robert (b. Hawstead, Suffolk) and his wife Sarah whom he married in 1870 after moving to London sometime in the 1860s. Robert worked for Hampstead Borough Council as a Dustman and married Anna Maria May Matthews in 1910. They settled in Kilburn and had two daughters, Louise, b 1911 & Winifred, b 1913.
On 11th February 1915, Robert enlisted at Mill Hill. Some of his service records survive and so we know he was aged 33, and stood only 5ft 5ins. He was given the service number
G5707 and became a Private in the 2nd Bn Royal West Kent Regt. This battalion was sent to Mesopotamia, but not Robert. He was sent to the 7th Bn Royal Dublin Fusiliers who were on their way to Serbia from service in Gallipoli and Robert was probably part of a draft of reinforcements after losses in that campaign.
The Balkan theatre in the First World War has been largely overlooked. The soldiers sent there faced tough trench warfare with extremes of weather and difficult living conditions. For more on the 10th (Irish) Division's experience in this area, here is a link: http://www.dublin-fusiliers.com/salonika/salonica.html  Robert fought with the RDF throughout the winter of 1915, retreating from Serbia and seeing action in the August & September of 1916 in the River Struma valley. He was killed in action on the 23rd September 1916 during raids across the river. Because of the fighting in the area, he was not buried until 5th October in a patch of mealies at Karadzakoj-bala, just north of the Struma river. This area became inaccessible by 1917 and his gravesite was lost. He is now named on the Doiran Memorial which stands on the shores of Lake Doiran in northern Greece. More than 2,000 casualties with no known grave are commemorated on this memorial.
Robert's wife Anna collected his effects, including pay of £4 and 17shillings in June of 1917. She did not remarry and died in Brent in 1968. Robert is also remembered on a plaque in Hampstead Town Hall, which names the employees of Hampstead Borough Council who did not return. 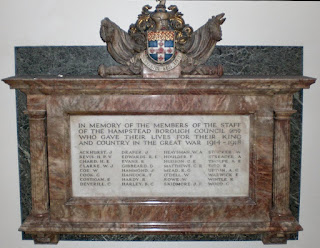