It Has Been A Whilee

Having just been part of the Army Staff Ride to the Somme, it occurred to me that I have not updated my blog for a long time and was shocked to see that it has been not far off 3 years since my last post! What has happened in the intervening years? Well, I have a new job and I took on PMC for our Mess, I just got busier...... But now with just a few more days left in green, I hope I will now have time to do what I started out to do 4 years ago.

So to restart this odyssey, I would like to share a couple of extracts from 24th and 25th Field Ambulances' War Diaries for the first day on the Somme. They were both supporting the troops of 8 Div whose objectives were Ovillers, La Boiselle & Pozieres, to the right of the centre of attack. 26th Field Ambulance was supposed to be in reserve.

24th Field Ambulance had Advanced Dressing Stations constructed within and behind the communication trench system. The Main Dressing Station was at Henencourt Wood and preparations had been made to receive casualties the next day:
"1st July 1916. 7.25am: Troops attacked. Many casualties in “No Man’s Land” from  machine gun fire. The wounded came into Main Dressing Stn during the past night in a small stream, but a large no. began to arrive about noon & continued during the rest of the day. The reception room accommodation was too little (4 stretchers & 4 light cases being dressed at one time), the undressed & dressed patients filled the huts & about 200 were  lying on straw outside.

The wounds of chest & abdomen were sent to No 92 Fd Amb, Warloy, but later in the day this was full & they were sent to whatever CCS was open. After Nos 38 & 36 CCS at Heilly were full, cases went to Nos 3 & 44 CCS at Puchevillers, about 12 miles away so that evacuation went on very slowly. Light cases were sent from here in GS wagons to 57th Fd Amb at Lavieville, then by supply lorries to Frechencourt, or by train to No 34 CCS at Vecquemont.
By evening we had accommodated a good many stretchers because of severe cases. By ADMS order these cases, as far as possible were taken off & put on straw or palliases . Some patients slept in the open.
Noon. Received message from Capt Burgess, that there were many wounded to be collected. C Bearer Subdivn sent forward (They arrived at Ovillers Post at 3.0 pm). Capt Atkins reported train working well.
3.0 pm. 5 cars of 37th Fd Amb reported & were sent to collect wounded.
6.0 pm. 26th Fd Amb ordered by ADMS to open at Div Collecting Stn. B Sectn bearers withdrawn from trenches, tired out."

25th Field Ambulance had their MDS at Millencourt with the same series of dugouts acting as ADS' forward of them. They, too, had made preparations but as with the 24th, the numbers of wounded just overwhelmed them.
"1/7/16. 9pm: Infantry attack launched at 7.30am. First walking cases arrived at 8am & first car at 8.45 am. Capt Douglas ,MO, DAG around to help. At 10am steady flow of walking cases set in & from 11 to 12 state of congestion owing to large numbers. In accordance with orders of DDMS cases were classified as follows. (1) being slight, to DRS (Div Rest Station) by own wagons. (2) Walkers. To Lavieville by own wagons for transference by Fld Amb there to CCS at Vecquemont, via Medical Regt Camp at Frechencourt. (3) Sitting and (4) Lying to CCS 36 & 38 at Heilly. Aldo & Chest cases to 92 Fld Amb at Warloy.
Up to noon, evacuation of lying cases from the trenches was slow, as the tram could not run owing to rifle fire but after that hour tram was practicable & cases came in more rapidly. Evacuation of cases from Millencourt was by means of 4 MAC cars which soon became insufficient. At noon the number of cases was so great that several hundred were by order of ADMS sent on direct to Lavieville without being dressed or admitted.
5pm. Urgent call for stretchers from Left Brigade. Sent up all available & indented on CCS for 20 more.
5.10pm. Requested by 92 Fld Amb to divert abdo cases to Heilly as they were full.
5.30pm. 26 Fld Amb bearers sent up on subdivision to each advanced collecting post.
6pm. 26 Fld Amb ordered to Albert to open in RE yard near station.
6.30pm. Indented for further dressings from A.D. Med Stores at Puchvillars.
7pm. Urgent demand for more stretchers. Indented on CCS Corrie without avail.
8.30pm. 36 & 38 CCS at Heilly closed. All evacuations till further orders to Puchvillars. This being a 4hr round journey still further congested the amb as there were only 4 cars for clearing us. By midnight we were choked with cases & opened several barns for temporary accommodation." 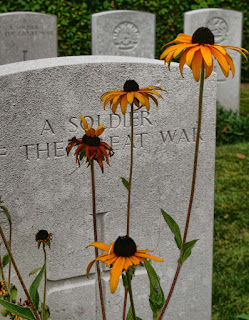 This was the situation all along the line. Casualty numbers were grossly underestimated and the whole evacuation chain became clogged with wounded unable to get back further to the facilities that could help them. It took several more days before the front was clear of the majority of wounded with many casualties trickling in from No Man's Land over the next week, or even longer. The Field Ambulances relieved each other as the men became exhausted from collecting and caring for so many wounded.
And so to conclude, a short extract from Sgt Maj House's recollections of that day. (To remind readers, Albert House, from Holsworthy, became RSM of 24 Fd Amb and wrote down his memories in a "journal" in the 1930's.)

"June 16th. Went into canvas huts in Hennencourt woods ready for the big Somme offensive on 1st July. This was a terrible slaughter, out Division instead of advancing about 6 miles (their objective) hardly reached the German trenches, and was practically wiped out. We dealt with 1702 wounded, and gassed cases. Our own Gas cylinders were hit by the enemy, and we had a lot of casualties that way. The gassed cases were a terrible sight, writhing and gasping for breath, groups of them sat on the ground and we could do very little for them. The clearing station behind us could not deal with the abnormal numbers of wounded, and we could not get cars to take them away. Hundreds lay out in the open all night on stretchers. One man on a stretcher in a hut screaming for food and water - on examination we find his intestines torn and protruding and he must not be fed. On returning later he is standing at the door of the hut ravenously eating a huge piece of bread and jam he has got from somewhere. He has on only a shirt and the bandages are hanging about his knees. A short time after we carry him away and he is buried next day with others in a temporary graveyard under the hill. "

The evacuation chain has changed very little in 100 years, and our treatment aims remain similar. I often wonder how we would cope with such numbers now - something that we discussed on "Somme 16". I do know that we would do our best!