It has been an even longer gap since my last post but I have been inspired by new friends who also share the passion of keeping memories alive. So to mark my return to this blog, I thought I would share the story of someone who was not part of my family, nor a member of our Field Ambulances.
Many years ago, I visited a friend in the Bracknell area and we spent an afternoon in Windsor. Whilst there, a Flea market was in full swing and we took some time to peruse the stalls. This is where I found this picture. 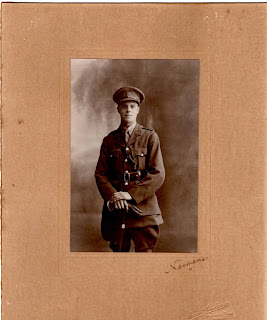 When I bought it, it was very dusty, in a broken frame  and very unloved. But something drew me to it. The name "Norman" was written in the corner, and there was a photographer's stamp from Redhill.  I took it home, cleaned it up a bit and put it in a new frame, and then spent some years looking at it, and wondering who Norman was, and where he came from. Eventually, I thought I should do  bit of investigating.
First stop, the uniform. Cap, collar and rank badges indicated he was a very young Second Lieutenant of the Queen's (Royal West Surrey) Regt. It was also quite a late style of uniform. I also found that the photographer, Ernest Jenkins of London Rd, Redhill, Surrey was in business from 1900 to 1934. So now I knew the young Norman probably came from that area.
On a whim, I searched "Soldiers Died" and the CWGC records and found one Norman from that Regiment who had been killed in 1918. This was 2nd Lt Norman Henry Towes of the 7th Bn, son of William Henry and Minnie Ethel Towes, of Redhill, Surrey. It seemed I had hit the jackpot . Of course, the lad in the photo may have survived the war, and was not 2nd Lt Towes at all, but after some more digging online, and a visit to the NAM to find his records, I was pretty convinced.
I am a member of Ancestry, and so wondered if there was anyone on there who had Norman on their tree. Again, as luck would have it, I did find a descendant although not a direct one. Norman turned out to be an only child and both parents died in 1947 and 1956 respectively. I can only wonder how his photograph, once proudly displayed on a mantelpiece, found it's way to a flea market.


So this is young Norman Henry Towes, born April 1899 in Redhill Surrey. His father was a Train Driver and they lived in St John's Road.  Norman became a Clerk when he left school but at age 17yrs and 10 months, he volunteered for service and was attested into the 32nd Training Reserve Bn on 28 May 1917 when just 18.

He must have showed some promise as he was selected for Officer Training, and commissioned into the 7th Bn Queen's on the 4th September 1918. On the 8th October he was landing on French soil to join his battalion on the Front. He survived less than a month as on the 4th November he was killed in action during the attack on the Sambre Canal, the same day and the same battle as Wilfred Owen. Norman was 19. A week later, the war ended.

His grave is found in the Poix-du-Nord Communal Cemetery Extension, a small cemetery about 8k south of Le Quesnoy. His parents chose the following inscription to be placed on his headstone;

He has no one left to love him, but I will remember him, and his photograph is now on my shelf. One day I will go here to visit his grave and pay my respects. 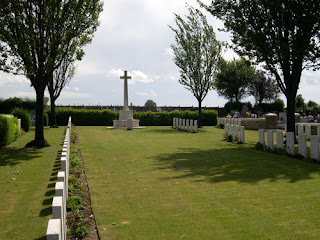