Another Division pushed up as a hasty reserve to help stop the German counter-attack at Cambrai, was the 61st (2nd South Midland) Division. The second line units of the South Midland Field Ambulances were attached to this unit and the 2/3rd lost two of it's number on the 5th December, both killed in action and buried at Fins New British Cemetery at Sorel-le-Grand. 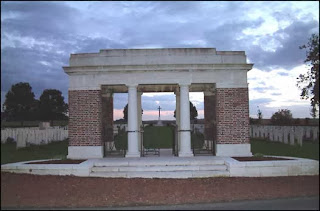 Sydney Lawrence Walker
Sydney was born in Carlton, Nottinghamshire. His mother worked in the Cotton Mills and was unmarried but had an older son, and would have a daughter 4 years after Sydney was born in 1891. Sydney lived with his grandparents until moving to Warwickshire to become a Miner, sharing a home with his elder brother, Alfred.

Had he not volunteered in the first month of the War, he might have found himself in the Tunnelling Companies but instead, enlisted into the 1st South Midland Field Ambulance at Warwick as a General Duties Private, Regt Number 1993. The unit was attached to the 48th Division and they landed in France on 30th March 1915.

Sydney was then struck down with Measles in April 1916 and did not return to his unit for a month. He was then transferred to the second line units serving with 61st Division and attached to 2/3rd South Midland Field Ambulance, our unit from the Bristol area. He was promoted to Lance Corporal in August 1916.

His last leave was granted at the end of November 1917, and he was back with his unit for only a couple of days before he was killed on the 5th December, along with Percy Hoddinott. It is likely that they were hit by a shell.


Percival Ernest Hoddinott
Percival was born in 1894 in St Paul's, Bristol. His father, Walter, worked in a stationer's & printer's warehouse and both Percy and his brother would work with him. There were several large Printing works in Bristol at the time and they produced all kinds of good including paper bags, wrapping paper, etc. His elder sister Florence worked a a paper bag folder, probably in the same firm as the male members of the family. 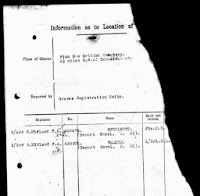 Percy enlisted into the 3rd South Midland Field Ambulance in September 1914 and was given the Service Number 2446. He was posted to the 2/3rd and landed in France on 26th May 1916. He served with the unit throughout and took his last leave in August of 1917. He, too, was with the unit as it supported the move forward of 61st Div, and was killed in action on 2nd December, along with Sydney Walker. They are buried in the same plot at Fins, a Gunner of the Royal Field Artillery between them.