It has been a while since I posted to this blog so thought I would re-start with a few photos of that peculiarity of volunteer units in the early 20th Century, the Volunteer Band, which seemed to thrive amongst RAMC units. (Fitting that the only RAMC band that still exists is comprised of Volunteers!)

Most of 243's antecedent units appeared to have a band at some time in their service. If there wasn't a full brass ensemble, then there would be bugles and drums. In the war, anyone who could play some kind of instrument that they could find whilst behind the lines was drafted in to play at impromptu "smokers" or at Christmas functions. There was always someone! 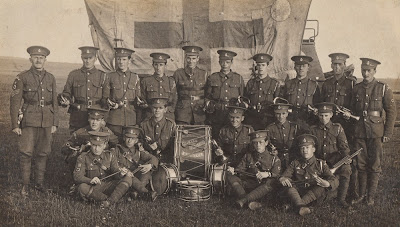 This is the Bugle Band of the 3rd South Midland Field Ambulance. The Bass Drum has the inscription "Bristol". The South Midland also had a marching band for many years both before and after the War, led by Bandmaster E T Stephens. 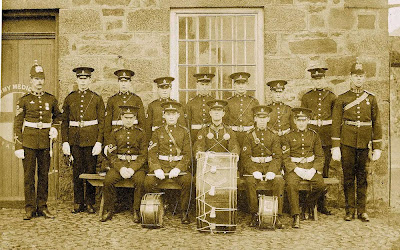 The above photo is the Band of the Cambourne Detachment of 2nd Wessex Field Ambulance. Most likely taken just before the war as they wear "blues". Some of them also have the Imperial Service Badge on the left chest indicating that they were prepared to serve overseas. This was not initiated until 1912. The picture below shows another band of 2nd Wessex Field Ambulance, but this time from 1915 - 18. The 3/2nd were the third line unit that acted as a recruiting and depot cadre. Some of these men also wear the ISB but there are no service or wounds stripes that can be seen.

And lastly, another Bugle band, this time from 3/3rd Wessex Field Ambulance, recruiting in the same area as our "D Det".

A rather "motley crew" with men of all ages, shapes & sizes! Some wear the issued "Utility" pattern tunic and others the 1914 leather equipment belt. No ISD badges here so I assume these are a mixture of new recruits and "downgraded" men! Let's hope they were a good little band and nevertheless did their bit on lifting the spirits of those going overseas!